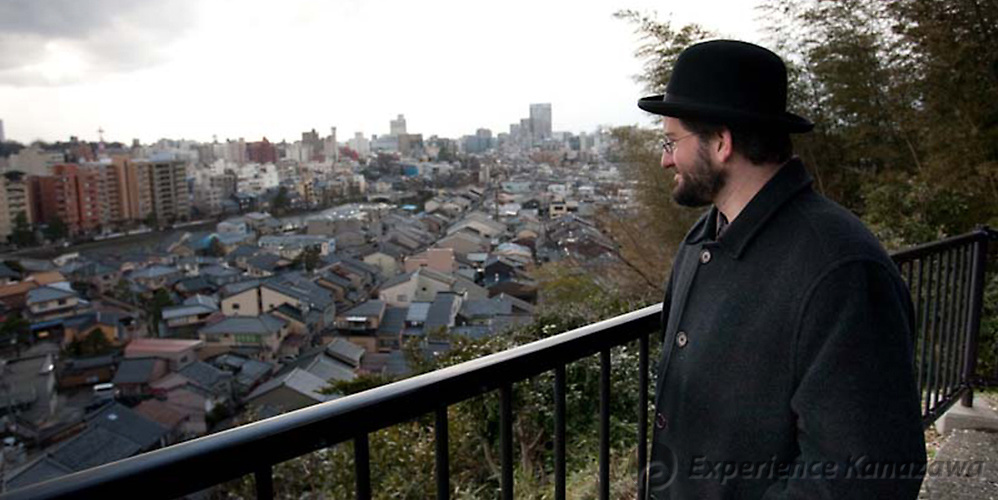 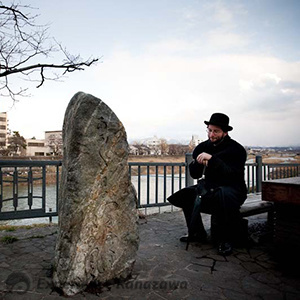 Japan, at the end of the 17th century, looks like an achieved administrative ensemble, whose dream of intangibility rests upon strict barriers. To enter the Kaga Domain, when coming from the Etchû Province, the former denomination of nowadays Toyama Prefecture, one has to go through the Kurikara Toge pass. This beautiful site is filled with history; that of a country long doomed to endure dreadful and everlasting clan wars. Here, in 1183, had occurred a fierce battle, whose ending helped turning the tide in advantage of the Minamoto clan against the Taïra, during what is known as the Genpei War.
Oddly enough, the traveler sauntering along the site, at the end of summer 1689, doesn’t mention the episode in his book of recollections. Similarly, he doesn’t make any reference to the nearby Kurikara Fudôson Temple which conserves a statue of the Kurikara (black dragon in Sanskrit), carved by Kûkai. An 8th century calligrapher, monk and poet, Kûkai was then said to have invented the kana characters and to have composed with each singles of them the highly revered poem Iroha.

Although its scent still lingers on
The form of a flower has scattered away
For whom will the glory
Of this world remain unchanged?
Arriving today at the yonder side
Of the deep mountains of existence
We shall never allow ourselves to drift away
Intoxicated in the world of shallow dreams.

Though Matsuo Bashô seems often eager at conveying through his poetry the inanity of so-called “glorious” feats of battle, this time it looks like he considered that only his silence could equal such eloquence to express his feelings.
Following the path of the sun to the west, Bashô and his companion Sora soon arrived in the city of Kanazawa at the end of August. Capital of a large and wealthy domain, Kanazawa was at the time of Bashô’s visit a thriving city reaching its final form.

When not staying at the court of the Tokugawa shoguns in Edo, the Maeda lords who ruled the domain during the whole Edo period would remain in the castle, at the very heart of the city. After a devastating fire in 1881, nearly all of the castle was burned down, leaving only a few remaining structures. It is under reconstruction nowadays. Built in 1676, the magnificent Kenroku-en garden that sprawls outside the castle’s Ishikawa gate, shows the Maeda lords’ power as well as their concern with arts and esthetics. Even today, the city of Kanazawa is largely identified with lush history and traditional fine crafts.
In many areas of the town, one can still feel the atmosphere of Edo period. The four occupations model of social structure that prevailed during the Tokugawa shogunate has left an indelible mark on Kanazawa. Houses of samurai, the first class, that once covered three quarters of the town can still be seen in the area of Nagamachi, though very few date from that period. Rich artisans or influential merchants’ houses also remain in the area of Owari-cho, then the broadest road through the town leading to Omicho, which already was the colourful and lively grocery market it is nowadays.
Matsuo Bashô is not so loquacious about how he spent his time here.
We know however that he stayed for about 10 days in Kanazawa, being often invited by local important figures as well as fellow haiku poets. Was it on the banks of the Asano River that he enjoyed still moments of calm and coolness off to start? 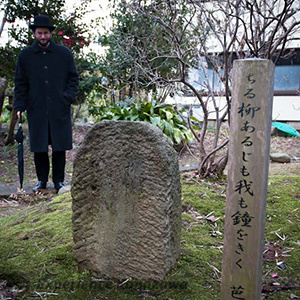 The cool of Autumn
Every hand start peeling
Melons and eggplants

He may also have found shelter in the temples literally clustered at the entrance of the town and in the area of Teramachi. Many of those temples are major sightseeing spots such as the Myoryuji, also known as the “Ninja Temple”, though its labyrinths of hidden doors and escape passageways are in fact not connected with ninjas. In the adjacent temple, the Gannenji, Bashô penned a breathtaking lament on the early passing of a fellow poet. 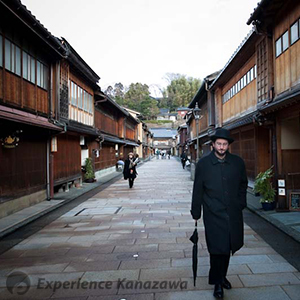 How moving may have been the poetry of that Isshô, whom Bashô had planned to meet, arriving in Kanazawa only to understand that he had died in the previous year?

Shake your tomb, reply
My voice that weeps for you
Is the autumn wind

In a significant way, Bashô’s diary, entitled Oku no Hosomichi, “the narrow road to the inner”, has an intentional open meaning.The “inner” can express both a geographical reality (the far remote places of Japan) and a subjective approach (expressed through poetry).
Beyond the scattered stone monuments here and there, one has to make his imagination work to follow the poet’s steps in Kanazawa. Did he walk through the Geisha district at Higashi, stuck between the Asano river banks and Mount Utatsu?Ensuing Kanazawa’s last expansion at the foot of the eastern mountains, during the second half of the 17th century, the district was patronized by the wealthiest merchants and artisans. Almost perfectly unchanged since those times, the area must be one of the most photographed in all Japan. Strolling along, one can hardly imagine that here was the field of a fierce competition in organizing parties at the most indecent costs. Was Bashô invited in one of those?
Or did he just cross the district and climb the Korai slope, past the Utatsu Shrine, to reach a marvelous point of view on the whole city, from Hosenji Temple, on the precincts of Mount Utatsu? Donald Keene, the well known Basho scholar speaks of the place as offering the most beautiful view on the sunset over Kanazawa city.
Willow leaves scattering The master and I Listen to the temple bell
Though it is actually doubtful that Bashô wrote the haiku mentioned at the temple’s entrance, it is very likely that Bashô wouldn’t have missed such beautiful and fulfilling scenery.

Translated by Professor Ryuichi Abe in The Weaving of Mantra: Kûkai and the Construction of Esoteric Buddhist Discourse, 1999